A Red Woman Was Crying:

Here's the part of Nagovisi in which many of the stories are set. Elliot, Siuwako,  Siro, and Polanara lived in Pomalate, Mesiamo and Lunta lived in Biroi, and Lalaga's Aid Post is off the map to the South. The areas to the west-southwest of Biroi-Pomalate are garden and cash cropping areas, with Osileni village and some smaller settlements there also. The Sovele Catholic mission is north-northwest of Biroi-Pomalate, off the top edge of the map. You can see the trail between Biroi and the Buin road that Elliot, Siro, and the other guys walked on in the story Dog Fights. Elliot and Siuwako's garden at Wanawo-nami lies to the northwest of Osileni.

Anyone who's interested in examining Nagovisi (and Bougainville) more closely can feed the latitude-longitude pairs here into Google Earth. Of course the imagery is from 2014 rather than 1969-70. The topography is largely unchanged, and the villages remain where they were, but are in most cases considerably larger. The Nagovisi population more than doubled between Elliot's time and the present. 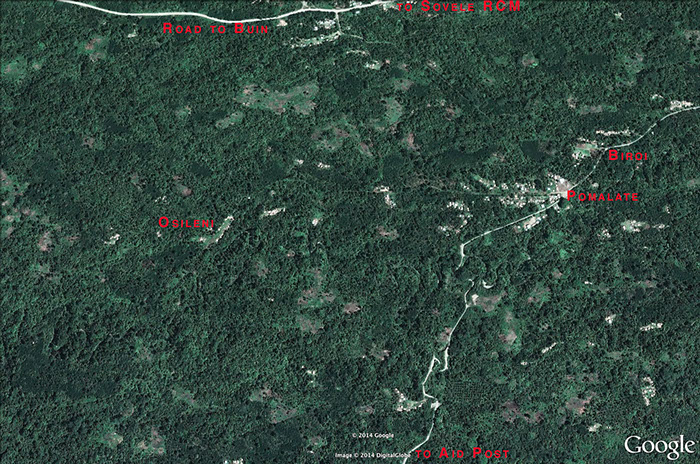